A small exclusive gypsy cob stud located in West Wales at Blewgyd Farm, St Clears near the Carmarthenshire / Pembrokeshire border. This enterprise has been the inspiration of Judith Hussell who has always kept a number of traditional piebald cobs on the farm where her husband, Clive Hussell, has for many years operated his sheep and cattle business.

About 2005, Judith decided to explore the possibility of breeding top quality gypsy cobs, but in more unusual and different colours not normally associated with the breed. By chance, she located a buckskin and white yearling colt which had been bred about 40 miles away in South Wales. This colt was from a background of buckskin and palomino breeding and carried a strong cream gene. This colt was named San Cler Toby and the story begins. He has, to date, left a fair number of buckskin and cream offspring which have found their way all over Europe.

We have also been successful in breeding silver dapple and blagdon cobs and they have also found their way across Europe. Our success has gradually gained momentum and we now have a number of homebred fillies and colts for sale on a regular basis. 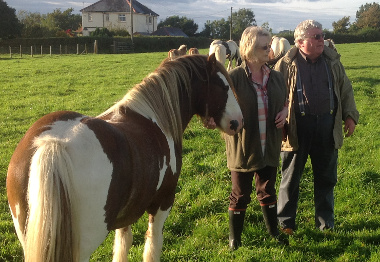